After reading about all the cooling problems that you can have with the 351 I did some research on how to minimize the problems I could have. After some reading I discovered that some intakes did not have the rear cooling ports open for use of the cooling system. Checked my new one and discovered mine were not open either and the front ones were partially blocked by some factory casting mess. A Dremel tool and a carbide bit took care of the front ports. Now the work on the rear ones.

Took a 5/8ths bit and opened the rear ports. 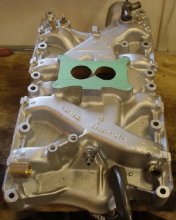 Designed my setup, keeping in mind the preheat hose for the carb choke on my setup. A little drawing and down to the hardware store.

Cost of the whole thing was under 20 dollars, $18.14 to be exact. Had the heater hose so cost was not considered. About 3 feet of hose. Tapped the left hole for a 3/8 NPT elbow and threaded it in with some thread sealer (5 minute epoxy, I hate leaks). 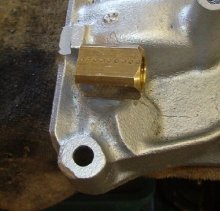 Let epoxy set and threaded in the hose nipple with proper thread sealer. 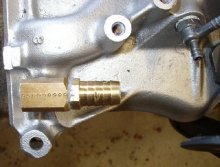 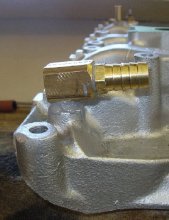 This completed the driver side. Went for a cold one and a bathroom break and returned about 15 minutes later.

The right side is another story. I discovered that this manifold was rather unique. I acquired it out of California for ten dollars because I wanted a Ford, nonEGR, 2 barrel manifold. It transpired that the manifold is the dual-plane model off a Mustang Mach car of the 69/70 vintage. The back runner for #4 cylinder is very high and it was necessary to build a very high connector on this side. Enough of the sob story, on with the install.

Tapped the right side with a 1/2 inch NPT. Pain where it hurts!! Never again will I go this big a opening for this type of install. Had to install a bushing to bring it down to 3/8 anyway so it was a waste. 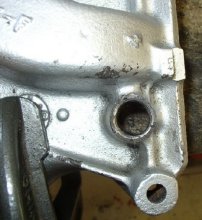 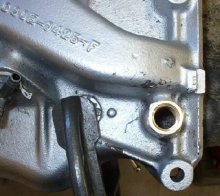 Used the usual thread sealer on this one too. Did I say I hated leaks?? Now for the four way TEE that I needed for this install. One outlet for the left cooling channel, one outlet for the choke preheat channel, one for the right side cooling channel and one outlet for connection to the cooling system. No-one makes a four way TEE so I made one out of a standard tee and drill and tap for the fourth connection. See pictures for the result. Looks pretty good if I do say so myself.

Installed on the bushing with the proper thread sealer. I mounted this fitting on a 1 and 1/2 brass nipple to lift it up to clear the runner. This was not enough. Next round it will be a 2 inch nipple. If you are doing this with this manifold, use a 2 inch nipple (cost is an extra dollar, whooppee, cost is going to kill us) Mounted and left overnight for the thread sealer to set up firmly. 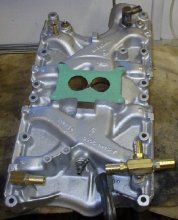 Next day, installed the hoses on the nipples and dropped the manifold on the motor. I put a short piece of hose with the TEE for the cooling system connection so you can see how this would work. Looks great and will help keep the monster cool. 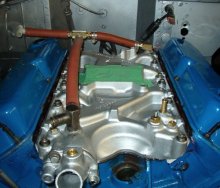 Will this set-up work on a 302?
I would assume it would if you have the two humps at the rear of the intake manifold like I had. One thing I did notice was that all the after market manifolds did not have those bumps so you could not do this modification.
Thanks for your response. My family is in the radiator business, and we have a 1974 302 that is giving us fits, cooling-system-wise. His mechanic has redone the head gaskets and checked the timing. We have checked the water pump, flushed the system, cleaned and flow-tested the radiator and tried two different t-tats. It still is running 220-230 after the t'stat opens, the gauge is reading within ten degrees of the actual temp, using a non-contact pyrometer. It has a six-blade, flex fan and the shroud is intact. In the past, we have owned five Broncos with the 302, including two wit A.C, and none of them ever ran over 210, event on the hottest of days. When the temp reaches 230, the engine loses power and starts spark knocking. Help!
More on this
Two guys I know did this conversion on a 5.0 liter engine
It helped both and improved the heater flow!!
guess it works on both engines

Will this also work to all types/models of heavy duty trucks?

Valentina Philips
I mean, will this be the case with my new heavy duty truck because my driver wants to know and so do I.