Article Gallery Discussion
This short Tech article is to help with Myth Busting the inaccuracies on the Internet and Facebook about Optima and other AGM style batteries AND which Optima is best for winching and daily driving.

I started using "Gel" type batteries back in the late '70's to reduce the acid/water leakage that caused corrosion on cables and battery terminals. My driveway back then was 1/2 mile long, extremely bumpy and across 2 farm fields. Every couple weeks I would have to physically clean the terminals and cables with baking soda or corrosion would get so bad the Bronco wouldn't start or my Warn 8274 wouldn't work.

So I started using dual "gel" type batteries (all that was available) and what a difference for maintenance! I became hooked on using anything other than a lead acid battery in my Bronco so I wouldn't be scraping green corrosion from my battery terminals.

stands for Advanced Glass Matt construction. Optima's use pure lead in construction. The more pure the lead is, the better the performance of the battery. There's no liquid, they don't leak, they can be damaged and still work. Makes them ideal for off road type use. AGM batteries are usually identifiable from the design of the top of the battery. Lead acid batteries have caps that unscrew, plastic pieces that pop off or some other way to allow you to add water and allow fumes to escape. An AGM battery will look completely sealed. No way to open it without damaging it.

Biggest mistake we all seem to make when running Optimas and AGM style batteries is how we charge them. Alternators are NOT battery chargers I've been told by Optima reps! If your battery won't start your car don't rely on your alternator to charge your AGM/Optima style battery. Put your charger at 10 amp or lower, yes- 10amps is the MAX amperage you should ever charge an Optima battery-direct from Optima. You do not need a special charger but they work better and more efficiently than just a typical low amperage charger. 10 amps is the max I was told directly by Optima tech. All batteries sulfate, Optimas do also and start at 12.4V.
Optima stresses that their batteries should never sit "at rest" under 12v. Charge slowly- they said it over and over to me. An Optima doesn't last nearly as long in a vehicle that sits and is used seldomly compared to a daily driver..

If your Optima is below 10.4V you should always use a charger designed for an Optima/AGM or you can charge the Optima this way. Hook your 10 amp or less charger on another battery in parallel with your Optima. The other battery must be 12V or higher. Turn it on and you're good.

Here's an example of why an alternator isn't a charger and why an alternator won't charge a dead Optima. I was 1100 miles away from home at a Moab Bronco Safari event and left my seat heaters on one night. Next morning not even a click could be heard from the starter when turning the key. I jump started my Bronco and after 15-20min at fast idle with my 4G alternator I thought I'd be good for the day. Nothing, zero, a dead battery still when I tried to restart. Bronco buddy drug out his week old garage sale special Walmart charger, slapped it on and in a couple hours (at very low rate of charge) my engine would crank and started. Used my rig that day and finished charging it on his charger that night. 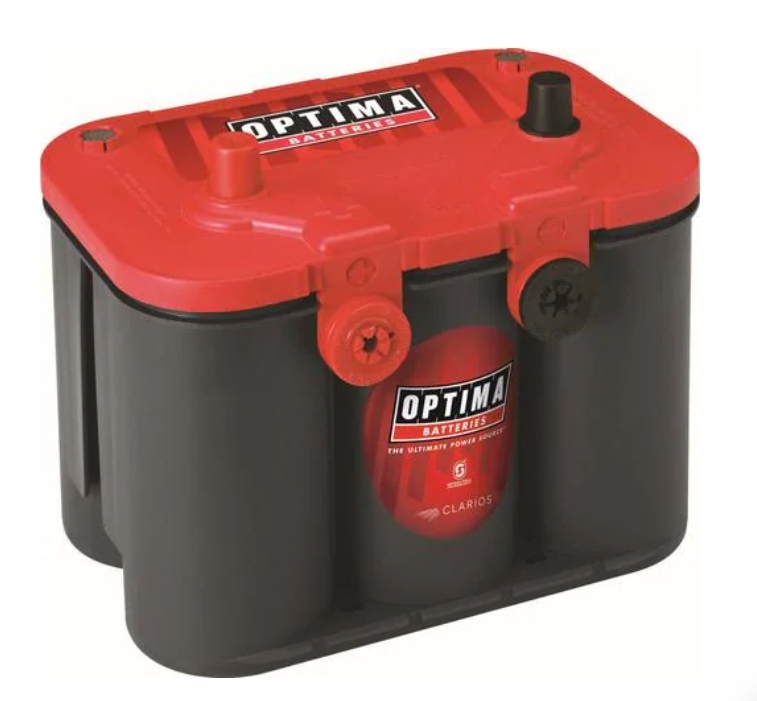 For off road use you can't beat an AGM style battery. If you select an Optima do you choose Red Top or Yellow Top?

Optima rep told me when I specifically asked about which battery would be the choice for the majority of us who use their battery for winching, off roading and daily use was to use a Yellow Top. Use a Red Top when your off road vehicle doesn't have an electric winch.

Use the top terminals for your heavy accessory use like a winch. Never use the side terminals for any load that draws more amperage than a typical starter. So- top posts for winch, side posts for starter and/or other accessories.

That’s great info and no hear say. Properly maintained these will last a long time. I just replaced the Yellow top in my bronco, lasted from 2006 - 2022, yes 16 years! It would probably still be going had I not accidentally left the ignition turned on for a month without a tender on it.
Two inaccuracies I see that should be corrected.
One is that no Optima is a gel, or “gel cell” battery in any way shape or form.
Second is the letters AGM stand for “absorbed glass mat” and not advanced.

The Absorbed part is how it holds lead acid fluid and suspension. Same chemistry as lead acid, and perhaps not in fully liquid form, but still not gel according to optima and others.
Maybe they’ve changed that, and if so I apologize for making waves. But in the early days gel was a completely different medium than AGM.
Great points to consider
Having had a long discussion with the Optima rep at SEMA a few years back, learned a few more things
The top color is only terminal arrangement. Red being top SAE posts (with maybe GM side posts)
Yellow is dual posts, SAE and stud
Blue is stud posts only.

There are 2 versions of the battery case.
Dark gray is a starting battery
Light gray is a deep cycle battery.

As for vents, yes there are some. Those dime sized black spots in the corners of the top cover. They can vent acid and fumes. Not in general use, but if overcharged they will. I have had an old Optima start leaking acid around a post once, but it was around 10 years old and past the end of its life.

Speaking of vents, there was (probably still is) a specialty version of a red top for the ~'07 Altima hybrid. It had a trunk mounted battery. There is a vent tube that attaches to the vent on the battery so it will vent outside the car if overcharged. The only version of an Optima I have seen with a vent nipple on the battery instead of the black vents you normally get.
Paul, thanks for noticing that my AGM statement printed out wrong saying "Advanced" instead of "Absorbed". My original Word document reads "Absorbed". I'll get it changed.


Other inaccuracy isn't one.

The tech article doesn't state that an Optima is a "gel" battery. I mentioned that I started using gel type batteries appr 44 yrs ago to correct corrosion issues on terminals but Optima wasn't making automotive batteries back then.

i will look into rewording that if people think that reference meant Optimas were a gel battery, which they aren't.

Thanks for the heads up.

I looked on their site and we are both not quite correct. It's "Absorbent Glass Mat"

I'll have Jon update it.

Thx
Just a heads up.

i guess the another thing that should be addressed in the comments is the Optima Tech article was only written to help us determine which Optima is best for use in our Broncos. This is why the other Optima batteries were specifically not mentioned in the write up.
Correction on another comment- there are more differences in the batteries than just top/side terminal placement.

Optima's site states (along with the tech quotes in the tech article) that the batteries have different standing voltage ratings like mentioned in the tech article-not just terminal placement. Also mentioned is the difference between them making one more suitable for deep cycle or the other more suitable for quick starts (quick amperage draw) or now they advertise a new fully rectangular cased Yellowtop which is supposed to be the cure-all- good for everything!!

nvrstuk said:
Correction on another comment- there are more differences in the batteries than just top/side terminal placement.

Optima's site states (along with the tech quotes in the tech article) that the batteries have different standing voltage ratings like mentioned in the tech article-not just terminal placement. Also mentioned is the difference between them making one more suitable for deep cycle or the other more suitable for quick starts (quick amperage draw) or now they advertise a new fully rectangular cased Yellowtop which is supposed to be the cure-all- good for everything!!
Click to expand...

When you have a chance double check what Optima says about the different colors and their type.
I don’t know this to be the current state of affairs, but in the past the three colors (aside from terminal layout) were:
Red Tops were always starting batteries.
Yellow Tops were always deep cycle batteries.
It was the Blue Tops that could be had in either starting or deep cycle.

In your list above you mention the opposite for the blue and yellow top versions.
Yours could be the most up-to-date because as I said I have not checked in a while.
But back when I was selling them that’s how it worked.