They're bulbous, ugly, protruding pieces. They look out of place, like they don't fit, as if they were some designer's afterthought. They're often cracked, broken, or missing. Their gaskets are usually cracked, petrified, shrunken shadows of their original selves – offering no protection from the elements and certainly not adding any visual appeal to the grille to which they're mounted. 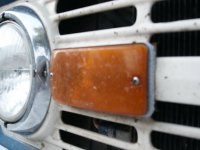 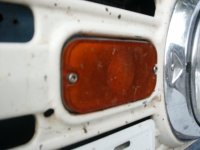 We're of course talking about the turn signal/park lamp lenses and gaskets installed on all 1969-1977 Broncos. The 1966-68 models were dressed with small, clear lenses inset into the grille. They look right. The grille was designed for them. Their flush mounting adds a certain sleekness missing from the later models. For 1969, faced with changing lighting regulations requiring orange lens, Ford engineers designed a modification to the original turn signal socket that allowed the larger orange lens to be added to the grille. In 1970, they went one step further and added side marker lights to meet the new federal lighting requirements now in place.

Thom Cheney is no stranger to most Bronco enthusiasts. In addition to being the premier artist in the Bronco community, he is also a member of that terrific triumvirate that puts on SOB at Sand Lake, Oregon, every year. And in recent years, his endeavors have included building a beautiful uncut Bronco he lovingly calls "Alice". Like many Bronco owners, Thom has steadily been performing Alice's transformation from an ugly duckling into a beautiful swan. And of course, the transformation has included the retrofitting of the 1966-68 turn signal lenses into Alice's later model grille.

The conversion is an easy one, and costs about the same as buying a new set of 69-77 turn signal/park lamp gaskets. The orange lenses used in this conversion were originally sourced for an early '60s large Ford car. In true Ford fashion, they work on a variety of vehicles. I bought my parts from Wild Horses, but other Bronco vendors sell the same parts. Follow along as we add just a bit of beauty to the grille of a 1969 Bronco.

Parts List:
· Note: Stainless hardware is a nice touch in this application. Hex cap head screws (aka "allen head" screws) work very well and are visually appealing.
· My total cost for this conversion (including several wheels for my cut-off tool) was about $20.

2. Remove the lens from the parking lamp assembly so it's not damaged during the modification process. 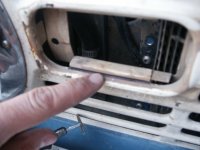 3. Unplug the parking lamp assembly from the wiring harness. Detach the assembly from the grille and remove. Once the parking lamp assembly is removed, you can easily see the pieces that were added to the grille for the later model lenses. (See Figure 1) You'll want to mark the top and bottom pieces for cutting and removal. The following photo shows where to cut along the bottom. 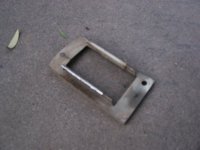 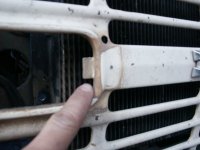 5. Once the lens bracketry is removed, the opening your grille should have two small tabs remaining. One is shown in figure 3 above. 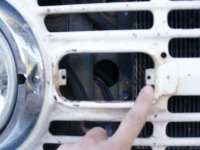 6. Using a pair of pliers, carefully bend these two tabs so they extend into the hole opening as shown in the photo below (do not drill the holes yet). Figure 4
7. Now that the grille opening has been modified, it's time to modify the light housing itself. The Bronco vendors sell the 66-68 light housings by themselves for $40 each, but since we're typical Bronco owners (i.e. cheap), we'll modify our existing light housings and save the $80 for something else. 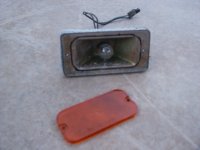 8. Take your 66-68 lens and hold it over the 69-newer housing and trace around it using an ink marker, as shown in Figure 5. 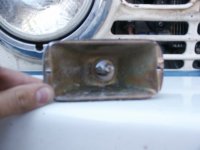 9. Using your small cut-off tool, carefully trim the excess from the housing. This is an interative process. It's recommended that you cut the housing a little larger than the opening at first and then trim to fit. You want as much "meat" as possible on the sides of the housing because you'll be drilling through that portion when you mount the housings. When you're done, the housing should look something like Figure 6 above.

10. Now comes the tricky part. There isn't a lot of overlap between the ends of your modified light housing and the tabs on the grille. Carefully fit the housing into the grille opening and determine the optimum locations to drill the holes such that they go through both the housing and the tabs. I recommend using a center punch and a small pilot bit in the housings and the tabs to make sure you get the holes where you want them before drilling the final mounting holes. Once you've drilled your final holes (3/16" diameter), test fit the hardware to ensure everything fits correctly.

11. Now that everything fits, you're just about done! Reinstall the lens into the park lamp assembly and install the assembly into the grille. The lens gasket can be a bit cantankerous – I like to use a little silicone or gasket adhesive to hold it in place. Then place your new lens on and install the screws and locknuts. Tighten up the hardware after making sure the gasket is centered correctly and plug the lamp back into the main harness.

12. Repeat the process for the other lamp and then enjoy the new look of your grille.

Special thanks to Thom Cheney for showing me this modification and inspiring me to finally do it to my own truck.

Great article... thanks. Is it possible to better align the images with the article?
What do you mean by "better align"? The 1st 2 photos or the grouping of 9? They appear aligned to me. Maybe they look different on your screen?
Did this mod the past weekend. Thanks alot easy to follow instructions and turned out looking great! I went with the clear lenses and orange bulbs.
I am definitely going to do this. I guess the designners of the bronco are just like the now owners. "cost conscious" Because I can't think of any other reason they would attach the turn signals like that. They are just horrible. I agree with joejoe I'll go with the clear lenses.
Great article. Kinda bummed that I wasted the $80 bucks on the conversion kit and new buckets. I won't ever buy them again though.
Thanks for the great article. It took me over ten years, but I'm finally rid of those ugly grey gaskets!