I don't totally hate it, (actually don't hate it at all). I do respect the work that went into it. I'm glad they used a tire/wheel combo that looks like they belong on truck.

There was one in Phoenix about a decade ago. Had an older super duty front clip.

Saw that. Agree about the wheels and (likely because of them) I'm not a real hater either. Kind of like it, but would not do it myself because I love the original face so much still. Even after all these years it's one of the better looking trucks. .
Well, other than this one that was on Craigslist tonight...https://sfbay.craigslist.org/sfc/ctd/d/monterey-1969-chevrolet-k-20-series/7434968485.html
Lot of little fiddly bits wrong with that truck, but I'd buy it! Even though 2wd, those have a killer look and that one is a nice (kind of unusual) color combo.
I know... Blasphemy with some, but I know there are quite a few older Chevy lovers closeted hereabouts.

Really when you think of the current pricing, especially coming from a dealer that's not a half-bad price.
All the little things are probably very fixable without too much investment, unless the sagging cab is a rust issue. Being in Monterey it very well could have rust galore up in the cavities. But judging by the frame and suspension, rust is not a huge issue with this truck.

In the case of the "Bronco" thought, it's certainly had more work done than just a facelift on an old body
And everything was stupid high at Mecum this week.

Have Bronco, Will Travel

Nice work but not anything I'd do or want to own. Much prefer the Gen 3's, 4's and 5's with the Raptor front clip and rear quarters.

This works for me... 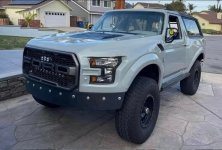 JB Fab said:
I don't totally hate it, (actually don't hate it at all). I do respect the work that went into it. I'm glad they used a tire/wheel combo that looks like they belong on truck.
Click to expand...

I agree, while I don't hate it and do give credit for the fab work involved, it's not my cup of tea.

I prefer this build to the white one posted initially. I don't hate the white one and rather appreciate the build and the time is took, in particular the addition of the Coyote engine and the king ranch interior. If I was going to spend some coin on something like that I would do everything they did but I would leave the front original.
You must log in or register to reply here.

B
Searching for a 1978 Ford Bronco Freewheeling