Starting this thread over! lol

Been looking for a start for years. Called on several the past few years, actually called on this project 1 1/2 years ago. It looks good in the pics but nothings done the way I want it or done right. Frame is sitting on the rear axle, MII struts have been cut/bent & reattached, lower MII arm is at a terrible angle, all welds look like the 1st day of HS students in a welding class. Not dissing, just saying if you or in this case me, were actually going to drive it on the street at 70 mph then you'd better pay up your insurance! Both auto & LIFE!
The guy I bought it from hasn't had a chance to work on it and he bought it from someone else, who probably bought it from someone else... no blaming going on here- it's a project.

That's OK because I want to build it for me and I have had a list written out for a couple years.

Talked with Shannon's Broncos about building a body and using parts I already have but found this and it should/might/maybe save me some time or money. Well, maybe not.

Here's what I want:

What I want to build is a unique Hot Rod. A build that isn't a copy of anybody else's or any of the other few lowered 2wd Broncos out there.

Chopped. I don't wear a cowboy hat so I don't need 5" of room above my head lol I want to be able to see a stoplight w/o using a prism but I want at least 3 - 4" out of the top and hopefully slope it back a bit also. That means the seats are going thru the floor!

Step notching the frame for the rear axle. Need some suspension.- hopefully bags

This isn't a show car- it's going to be a GO car. I'm sure I'll end up at a couple local shows not expecting anything other that good times talking Broncos!

It looks decent from 30' away but I'm only keeping a couple of the parts the way they are now. Everything in and under the body will be different.

Got a lot to learn... hope you guys can help

1st pic - hasn't been home an hour! Snow for the last 20 miles and the first 3 miles where I bought it but perfect driving day for the rest of the trip! I was a little worried but sneaked it home between snowstorms! 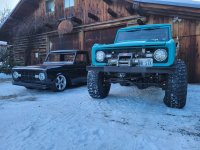 I took a bunch of pics and spent hours measuring everything I could think of because, it will never look the same again!

I need to have some reference measurements.

What I was really hoping to get were corner weights! I will have e to do a "best guesstimate" and hope I'm spot on . Bags are a bit more forgiving than coil overs but ... 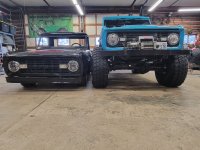 Got a few hours in the shop and it's coming apart. Spent most of my last couple days moving 30" of snow around in circles I swear! 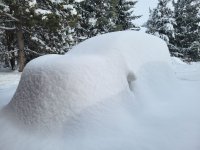 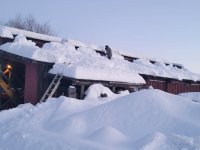 Here's some progress pics from my one afternoon on it. 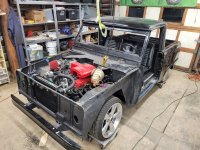 NOW I know why so many of my buddies bought hoists. I can barely slide my head underneath this thing to look at a tape measure much less slide my low profile floor jack under it... hits the gas tank. Can't get to the diff... I've got 5 1/2" under the rockers. THIS is going to be DIFFEENT! lol

This is going to be fun!

What’s all that white stuff?

We built a corner scale out of one of these from a post that ntsqd made, it works quite well
Tongue scale

Check out TS’s post #79. You probably have stuff to make that laying around.

I remember reading his engineers "scale" thread! But totally forgotten it so THANKS!

Guess I have something else to order! lol

I need to text Thom anyway... need to ask him about some Hot Rod shop that he knows about.

thanks again Steve! I spent 8+ hrs yesterday moving "that white stuff". Then looked up and realized that the snow slid off my solar panels (on the upper roof) down to the roof below (it hadn't slid off when I had shoveled earlier) effectively loading the compacted lower 5' of roof with 180" of compacted snowfall !!! I had to drive the shovel into the compacted, snow with my foot like I was digging a hole in dry clay soil. Freakin' exhausting as each shovel full felt like concrete. Anybody that has a steel roof and has dug thru the snow that has fallen off the roof & packed on the ground knows.... . Anyway, that was my afternoon/evening. Sledding tomorrow!
Last edited: Jul 8, 2022

I'm looking forward to see how this turns out. My dad's friend did this with a flat fender, tubed the rear with old school Mickey Thompson 50's and a 427.

Brian, you need some heating elements under the steel panels
OP
OP

Agreed Lars!! Hey, how do you get to be a "Curmudgeon" and I'm just a common "Bronco Guru"? Is it because you've been on the list for 32 days longer than I have??? lol
OP
OP

Thanks Savage. Too many irons in the fire for me to make good time on this project but I'm dang excited to be doing something a bit different. I'll bet that flat fender was squirrely as heck with that 427... they are so short!!

Nice!! going to be able to fit some paddles in the back??
OP
OP

HAHA!!! Paddles would be awesome although I'm hoping for 5" of overall travel... actually thinking of some kind of "rock ski" under the rockers to keep my long driveway from taking bites out of them. lol Driving on 40"s everyday I don't notice where speedbumps, rocker killing sidewalks are lurking .. lol
Last edited: Jul 8, 2022
OP
OP

Looking for a Mustang II frt end expert. Too many "experts" on the web and since I know nothing about setting them up correctly, just what not to do.... point me in the right direction someone!

nvrstuk said:
Thanks Savage. Too many irons in the fire for me to make good time on this project but I'm dang excited to be doing something a bit different. I'll bet that flat fender was squirrely as heck with that 427... they are so short!!
Click to expand...

My Dad wasn't scared easily, but that flat fender was a beast and hard to handle. My dads friend was a little crazy, and built some crazy vehicles!!!!

nvrstuk said:
Looking for a Mustang II frt end expert. Too many "experts" on the web and since I know nothing about setting them up correctly, just what not to do.... point me in the right direction someone!
Click to expand...

Fitzee fabrications on YouTube is building a strip car, custom frame with an old datsun (toyota, my bad) body on it, with a mustang front end. Hes not very technical, but goes over narrowing it and a bit of the geometry. TBH, i think you may be ahead of him a little in terms of approach, but it might be worth watching the last 2 or 3 episodes.
OP
OP

Thx 67, I'll check it out. I have a tendency to go overkill on spec's and keeping within spec's on suspensions... I kinda treat them like engines-worth it in the long run.
F

nvrstuk said:
Thx 67, I'll check it out. I have a tendency to go overkill on spec's and keeping within spec's on suspensions... I kinda treat them like engines-worth it in the long run.
Click to expand...

What did he do for a crossmember for mii frontend

fordguy said:
What did he do for a crossmember for mii frontend
Click to expand...

He basically built a simple jig to keep the geometry correct off the original, then sectioned the center of the mii crossmember out, and replaced it with a 2x2 steel tube U that will make room for the oil pan. I think he narrowed 4" for the width he's after. He has talked about how he intends to narrow the steering, but hasn't got that far yet.
He currently has his narrowed front now connected to his 2x3 box frame, and is completing the rockers on the body of the car so he can mate the frame/body. He calls the series the Crusty build, and while not hi tech, he builds some nice stuff with a simple approach.

This is blasphemy!!!
You must log in or register to reply here.

This maybe out there, anyone ever seen a chopped top bronco?