levib1 said:
Any input on the rest of the assembly? Looking for an exploded diagram for the spindle/axle/hub interface.
Click to expand...

Did you get instructions with the kit? If not I can e-mail you a PDF of ours. Our link is temporarily dead for some reason, but I have a copy I can send if it helps.
There's a lot to know here as you've found out already. Especially if you were not involved in taking the old stuff apart.


levib1 said:
2 large bearings which i'm pretty certain one goes each side of the hub to ride on the spindle. And also a large seal which goes on the back of the hub.
Click to expand...

Correct. Inner (larger) and outer (smaller) wheel bearings.
Races included, but in most cases you will find new races already installed so in most cases, use those.
The exception would be if you roll the new bearings (called "cones" in industry speak) around in the new races (called "cups" in the industry) and find them anything less than glass-smooth.
As discussed in another thread recently, bearings and races are one of the few remaining parts that are very precisely manufactured and where one brand might still be perfectly good when used with another. But when push comes to shove, there's nothing as consistent as using like brands.

Here again, you might find the new spindles already have their bearings pressed in. If so, leave them!
As I see was asked later about greasing, start by pressing a little grease into the spindle bearings. They are pre-greased, but it does not hurt to try to get a little more into the cavities. You will also pack the spindle with grease.
Use the same wheel bearing grease you will be using for the wheel bearings.

The seals will depend on two things. Which spindle design you were given in the kit, and more importantly, which spindle/axle design your Bronco came with originally. If an earlier model with the press-in seal behind the bearing that the axle slides in to, and the new spindle is compatible, then that's what you use. If you have the later style without the press-in seals, the later style with the two seals and the plastic thrust washer are what you use.
Your spindles appear to be compatible with the press-in spindle seals, but the big seals in your pic that I can see look like the inner wheel bearing/hub seal.
If you can find a printed or stamped number #4250 then that is exactly what they are. If you find another number, post it up and we'll see if it's the alternate for the 4250.


levib1 said:
In the foreground of the pic, there is another spindle bearing (duplicate I think), but also more seals (1 slightly smaller than the spindle bearing small seal and 1 considerably larger)
Click to expand...

Yes, looks like you have duplicate spindle bearings and I do not see bearings pre-installed into your spindles. So you will press them in to the cavity to the bottom where they stop. Do not worry about keeping them flush for any reason. They should be slightly recessed when fully seated.


levib1 said:
1. Appears that the race for bearings pressed into hub. Therefore, do I only use the bearing, not the race of the big hub bearings?
Click to expand...


levib1 said:
2. When pressing the large seal into the hub, do I put any sealant on the seal? Same question for any other seals...
Click to expand...

Once you slather grease into the inner cavity (coating all surfaces with grease to avoid rust issues) and fully pack the inner bearing with grease, install the bearing and then tap in this seal. It retains the bearing.
You do not normally need sealant. The outer surface of the seal case usually has a sealant/lubricant to help with the install and keep it sealed.
You can do it by hand, with a hammer and block of wood, or whatever round tool you have, but you must still be slightly careful or you can distort the seal putting it in. It's not hard, but it's not something you can sleep through either.
Before installing the assembled hub on to the spindle, you can wipe a little grease on the inner seal surface to help it slip over the spindle register.


levib1 said:
3. Not certain as to the assembly order of parts. Any info would be greatly appreciated. I am clear on the outer hub assembly, it's just everything else that is in the picture below.
Click to expand...

Looking at the picture, you have the later style spindle seals. For the moment we'll assume this is the correct style for your setup. If so:
1. The small seal slips in over the spindle bearing and just barely holds itself in. If you bump the spindle it can fall out, but that's normal. I have always installed them "open side" facing in towards the bearing.
2. Next is the large V-shaped seal. The small lip faces the bearing and the larger flange side fits up against the axle shaft's inner flange.
3. The washer (original was bronze, modern replacements are plastic and it's been this way for over 40 years) installs over the axle shaft with the beveled edge facing the axle flange. There is a radius machined into the axle this fits over. You can try it both ways and you'll see which way it fits flush.
4. Then you can install the spindle over the axle shaft and bolt it to the knuckle.
If you pushed a lot of grease into the spindle it will mostly push out the end when you install it. So be ready to catch it and use it for the outer bearing and inner cavity of the hub. But putting grease in the spindle helps to ensure a nice long rust-free life for the components. The loose fit of the inner seals and bearings of the spindle guarantee moisture can get inside. Packing the spindle with grease should stop this completely, or almost so.

Sorry I did not read all the previous responses, so apologies if this has already been discussed. Going to do that now though!

Want to touch on something mpboxer brought up. The outer axle snap-rings.
If yours still had them (which many don't anymore) then if you can re-install them that's great. But if you can't then don't stress.
In the history of Bronco modifications we've run across this since the first set of Warn lockouts was installed. Goes double when you add a disc brake conversion using Chevy parts!
Apparently the original Warn parts (and all the ensuing brand versions) were patterned after the GM-based Dana 44 axles. Why Dana/Spicer thought the ring groove in the axle stub should be in a different spot between GM/Dodge/Jeep/Ford is beyond me, but perhaps it was a request by one or all of the O.E. customers.
The result is that 90% of the time (or more often most likely), when you replace your original lockouts with aftermarket units, the snap-ring cannot be re-installed. Same for using the GM-based disc brake conversions. So from our previous experience here, you have a 90% chance or better of not being able to re-use your axle shaft snap rings.

DirtDonk - Thanks for the extensive reply!

I've got it all together. I really packed the grease inside the spindle - hoping all voids filled with grease. Hope this is OK.

Now alls left is the locking hubs. Maybe this next week for those.

This thread kinda morphed into not just the ball joint, but the entire axle/spindle/hub assembly.

Here's a couple photos on the build. 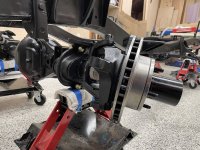 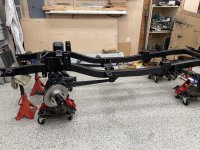 You said earlier that you had the hubs and bearing adjustment dialed in. Did you go by the book, or by some random YouTube videos?
I have to ask because the videos can be all over the place.
OP
OP
L

DirtDonk said:
You said earlier that you had the hubs and bearing adjustment dialed in. Did you go by the book, or by some random YouTube videos?
I have to ask because the videos can be all over the place.
Click to expand...

Hey Levib1, looks like you’re a ways off from installing the Master Cylinder but wanted to let you know I think the proportioning valve instructions are incorrect. Double check, but I think you’ll want to connect the front reservoir of the MC to the front ports of the prop valve and the rear reservoir of the MC to the rear port of the prop valve. Everything looks really good!
OP
OP
L

Yeah, a ways to go before the master cylinder. Thanks for the heads up.
You must log in or register to reply here.