Article Discussion
Installing a front roll cage was actually quite a bit more complicated and thought intensive than simply  fitting some pre-bent tubes together and welding them in place. It was all the work done to make  room for the cage that took the most time. Clearance becomes a premium when deciding exactly where to install the cage. The main clearance problems to consider when installing any front cage are:
The tubes that come in the Smittybilt kit are long enough to give you some leeway during installation. You have a few options to make sure that everything still works the way it did before. You can either give adequate clearance everywhere and deal with the vertical bars being very far back and possibly interfering with driving and getting in and out of the truck...or...put the bars right up against the dash and deal with not having your glove box or parking brake...or...you can choose to modify everything, create a lot of work for yourself, and turn a 3 hour cage installation into a two week tear down of the entire interior. I went with the latter. 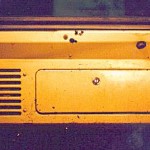 This is the stock glove box...and as soon as a bar goes in there it becomes completely useless! Some people never use their glove box anyway so it's no great loss, but if you like the storage and (on some years) ever want to change any fuses, there are a few options. You can take the door off and use it as an open storage tray, you can hinge it on the right side instead of the bottom and open it sideways or you can do what I did and just move it.

This is what it looked like when the jig saw blade finally came to a stop. I just traced a perfect rectangle and cut clean, straight lines (well...not really. The corners weren't square, and the lines were all over the place.) I should have actually been more careful with the cuts. If I did it again I would use a square and go nice and slow. The more square and straight the cut is the less welding and filling you'll have to do later. 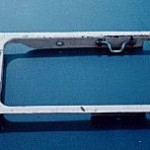 The cut out frame needs a little work before it can be turned up side down and expected to perform the way it should. The hinges and latch need to swap positions so that the hinges are on the new bottom and the latch is on top. Luckily there's enough metal on both top and bottom to make this work. The lip on the old latch side (the new bottom) is too wide for the hinges and needs to be trimmed out as shown. The side to the left of the latch has not been trimmed and the side to the right has. Then holes need to be drilled for the latch and hinges. If you centered your cut top to bottom then everything should work well with just the factory play in the hinge and latch screws (I wasn't quite centered so I had to enlarge some holes) 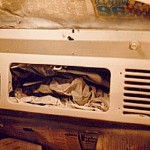 After welding the frame back in, grinding down all the welds, using a little bondo and repainting it, I realized that I really should have painted the whole dash. And since all the bezels on Bronco dashes are almost impossible to mask off, I took the whole dash out to paint it. If I had known I was going to take it off I would have welded it from behind and made my life a lot easier! I suppose that's how working on a Bronco is sometimes. 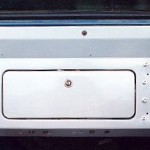 So here's the finished product. The new glove box position will work out well I think. It keeps full use of the box, door and hinges and puts the speaker grille behind the roll bar where it really does about as much good as it did in it's stock location. Now that the glove box problem is taken care of it's time to install the actual cage.

There are no comments to display.