Article Discussion
Power steering on any early Bronco is a nice luxury. Power steering on an early Bronco with 33" or larger tires is a definite necessity. Most Bronco owners, (unless they're lucky enough to have stock power steering) convert over to power steering in one form or another. Whether it be a stock system off a donor Bronco, or one of the conversions from other vehicles (F150, Lincoln, Nissan, Buick, Scout, etc.) the addition of power steering makes both the trail and highway much more enjoyable.
However, those same tires that wore your arms out before you put in power steering, now tend to wear out your power steering pump. It has been documented by quite a few Bronco owners (myself included) that stock Ford pumps do very poorly when asked to tackle 33" or larger tires. The average lifetime for a stock pump ranges anywhere from 1 week to 1 year (depending on tire size, driving style, etc.) but always seem to go out in a very noisy and inconvenient fashion. One solution to this problem is to go with the Ford heavy duty style pump. Aside from being fairly expensive, this route has still resulted in some premature pump deaths. Another more popular solution is to convert over to the Saginaw, or "canned ham" style pump. This pump seems to take the torture better and I've heard few stories of dead Saginaw pumps. (My Saginaw pump out of a junk yard has lasted quite a bit longer than both of the "new" Ford pumps I had on previously) 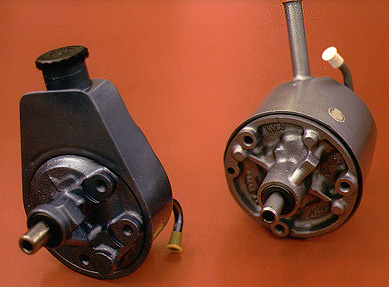 Comparison showing the Saginaw "Canned Ham" pump on the left and stock Early Bronco pump on the right. 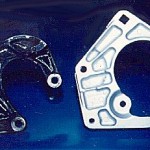 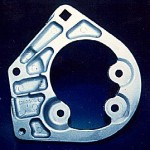 Both the stock Bronco system and the 351M Saginaw system use very similar mounting methods. So similar in fact that I was convinced I had found the perfect bolt up until I got home and could compare the two brackets side by side. Both use a pivot bolt that slips through the pump bracket into the head and an adjusting bolt that keeps the pump from pivoting once the belt is tight. 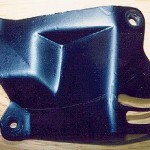 The only thing keeping the 351M pump bracket from bolting directly up to the stock Bronco engine bracket was the distance between the pivot hole and the adjustment arc. By simply using the 351M engine bracket as a template for the correct position and length of the curved slot I spent 15 minutes with a die grinder and cut a new adjustment slot in the Bronco engine bracket. In the photo to the left the bottom slot is factory cut for the stock pump bracket. The top slot is the new adjustment slot needed to mount the 351M pump bracket. Notice the very small portion of metal left between the two slots. The lower slot was later filled in with a welder to increase strength of the bracket. 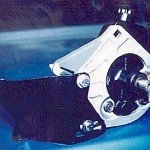 This was the finished system before being mounted in the truck. The only thing left was some minor shimming to align the Saginaw pulley with the crank pulley. By putting various size washers between the brackets and the head the pump should align easily. Because the fittings on a Saginaw pump are a little different from the stock Bronco pump, some fittings or line extensions must also be made up. The Saginaw pump I used (and these will vary between models) had a 3/8" male flared fitting at the pressure side instead of the 3/8" female flare on the stock Bronco pump. This was a simple fix using a short length of hard brake line with 3/8" female flared fittings on both ends to connect the pressure hose and the pump. An added advantage to this was that I could bend the hard line close to the body of the Saginaw pump so that it cleared spark plug wires and the dipstick. Other Saginaw pumps may have different fittings, but special fittings or hoses can be made to connect almost any size flared fitting.


See below for photos of the bracket and PS system installed.

This looks like the article written by Jon H. for his previous EB site. I used the recommendations to add a Saginaw PS pump to my EB long before the vendors sold adaptor plates.

Kurt, yes this is the exact same article. It was my very first tech article back in the 90's when my site was still "Jon's Bronco Stable." Man how time flies.

Oh, and this modified bracket and Saginaw pump are still going strong on my own '72 even after all these years. I'm even still using that same junk yard Saginaw pump. No rebuilds or anything.

Just out of curiosity, do all of the pump/bracket combos mount the pump so far out towards the fender? I currently have everything but the steel adjusting bracket and have mocked the whole system up in a more inboard orientation using an adjuster that I fabbed up myself using parts from the bracket of a big block FS bronco that the sag pump came off of and a lincoln steering pump bracket (mounted to the head at the bolt hole that's roughly 2" below and towards the center of the one used in your photos). I had hoped to replace the homemade part with a factory bracket when I had a chance, but I think the setup I came up with leaves more room in that part of the engine compartment.

Good article though. The photos alone solved a few questions I had about my setup.

just checking, can a 1987 van 351 W pump bracket and caned ham fit my 1973 ranger could it be a closer fit than the 351 M bracket conversion?
I purchased a HD saginaw pump / bracket / hose from a reputable vendor on this site. It whines i've run it about 250 miles since installed. And trust me there is no air in the system . Im running 33x 12.50 - 15" tires. Front end is greased up good, nothing binding. Where can I buy pump from that don't whine. New / used / rebuilt . I don't care . thanks .